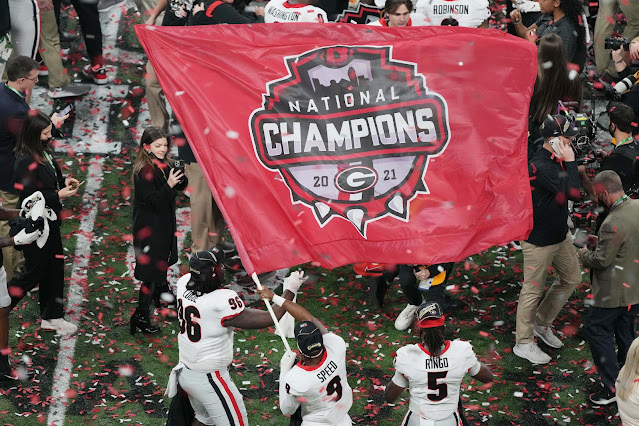 What a feeling.  Georgia winning the championship was so much fun to watch.  It was a good game and seeing your team win is a special feeling.  Especially after 40 years of waiting.  And beating 'Bama to do it?  Priceless.  The game itself was not what I expected but what I had hoped for as the Bulldogs defense shined.  In the first half I was so frustrated seeing the Crimson Tide live in the Bulldog offensive backfield.  The good news is the Georgia defense was frustrating Alabama at the same time with some timely stops on promising drives.  The second half it looked like the Bulldogs came out reinvigorated and wow that fourth quarter.  So much fun.  It was closer than the final score of 33-18 suggests but Georgia was on a mission.  The Alabama running game never got going and Bryce Young didn't have the time he needed in the pocket.  The Bulldog running game really took off.  For the game they rushed 30 times for 140 times thanks to Zamir White and James Cook.  Stetson Bennett struggled in the first half but came up huge in the second half with both his touchdowns coming in the face of pressure.  The 40 yard pass that put them up for good was great.
I know the game was up in the air until the last minute but it really felt like Georgia was going to win after that long touchdown.  Alabama just didn't have an answer for the Bulldog defense.  I came down with a stomach bug the next day so I'm just now getting around to putting my feelings here.  It was a tough playoff with my two teams, Michigan and Georgia, playing each other in the semis.  What are the odds?  I did think Georgia was the better team which played out.  And now they have their championship.  After seeing them lose to Alabama, and their backup quarterback in the 2017 Championship, this felt so sweet.  Not to mention they avenge their loss in the SEC Championship game just last month. I'm so happy and in overload with both Georgia and the Braves bringing home championships within three months of each other.  I'm loving it!!!  Now to the important stuff...  www.fanatics.com 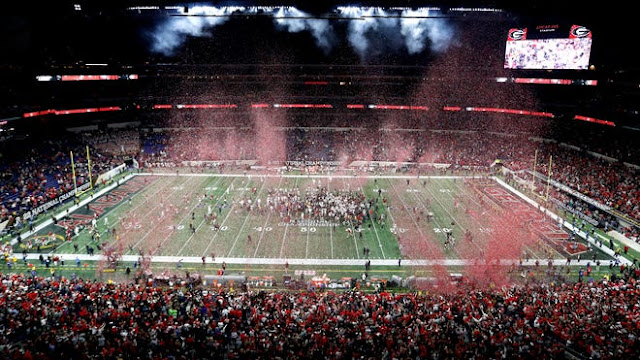